I thought, the recent playlist meme on ThoughtWorks blogs is pretty nice, so I decided to blog the next ten random songs:

I’m pretty confident with that selection of music. I think it represents my taste quite well.

Just for reference, the next five songs would be:

A loooong running meme, it seems to orginate from berlinde (which doesnt seem to date her entries…).

I wish everyone a Happy New Year!

NP: Bob Dylan—I Shall be Released 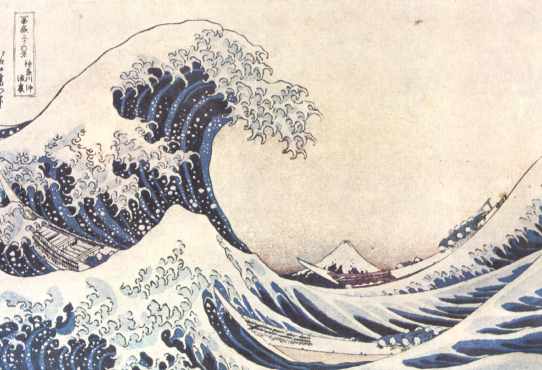 Which picture could fit better to the current situation?

Is this just another phase? earthquakes making waves
Trying to shake the cancer off? oh, stupid human beings
Once you hold the hand of love,… it’s all surmountable.

Currently, there are three popular ways of parsing XML: The DOM, the SAX and Pull APIs.

DOM is probably the most well known, and it did a great job showing off XML’s slowness. This is because DOM reads the full XML into the core as a tree structure. The nodes of the tree mainly consist of Element nodes and Text nodes. DOM is very easy to use, but also very inefficient. Ruby’s REXML is mainly used in the DOM mode; although it’s API is rubyfied and made a lot nicer, the core idea is the same: provide a tree structure to XML documents.

The downsides of DOM (and the complexity of implementation) turned out pretty quickly, and soon the Simple API for XML (SAX) was implemented in Java. SAX is a streaming API, the SAX parser scans over the document and emits events. For example, the simple document

Usually, the program defines a new class whose methods get called by the SAX parser.

SAX is very efficient (the API is quite like the Expat one, which is well-known being the fastest XML parser on earth), but can be amazingly complex to use. (Personally, I don’t have a hard time with it—at least for easy stuff—, but there are people that don’t like state machines.)

REXML also provides a SAX interface, which is quite fast, but of course not like the real thing. If you want absolute performance, I still can only recommend the Ruby Expat bindings. Though the binding was not updated recently (my version is from 2002), it runs like hell.

The last, and the IMO most interesting way to parse XML is a pull API. As usual, the first implementation was written in Java (XPP1, I think) and the API was only informally (i.e. by implementation) defined. The XmlPull API changed that. For Java, there now exist a bunch of XML pull libraries that can all be accessed using the same way.

REXML provides a Pull API, too; but has been marked experimental and they don’t recommend production use. Besides, it has problems with namepaces (which is true for REXML in general. :-/).

Although being technically one step lower than SAX, Pull APIs are much more intuitive to program. The Pull API requires you to fetch each event by yourself, therefore you don’t need a state machine as you can simply get the next events when you need them, not when they arrive. This can be shown best at a simple example:

My old homepage provided an index facility, where words marked in idx and hidx (for hidden index) are aggregated into a special page. I implemented the program first using REXML and its DOM API. The page to link to can be found out getting the name attribute of the page root node. I basically needed an index word to page hash. Here is the parsing code:

This program was a total performance hog, and intolerable to run (for me, at least). I rewrote it using expat:

This program works very fast, but it was a bitch to write and lots longer, of course. For complex formats, SAX gets darn complicated, trust me.

Since the REXML Pull API didn’t fully satisfy my needs, I decided to rewrite a pull parser for ruby from scratch (Heck, I even spent a day hacking it in pure Ruby, but soon gave up.), based on the Pull API exposed by libxml2. I think above example will read something like this when it’s done:

Now, you have the easiness of DOM and the speed of SAX. :-) (And I can look at XML again.)

NP: Pearl Jam—Push Me, Pull Me

The master asked the novice: “What should be prefered? A shower with one knob, or a shower with two knobs?”

“The one with two knobs, of course, because it allows for greater diversity during showering.”, the novice responded.

“Then you shalt receive the shower with two knobs: One knob for too hot water, and the other one for too cold water.”, the master said.

Upon hearing this, the novice was enlightened.

NP: Bob Dylan—Someone’s Got A Hold Of My Heart

I just found PowerPoint Remix by Aaron Swartz via del.icio.us, and this “slide” I couldn’t leave behind unblogged (emphasis mine):

I just discovered this, IMO very felicitous, compilation of songs by Michael More, called “Songs And Artists That Inspired Fahrenheit 9/11”. Although I don’t fully agree with him in political ways (he has a point though, for sure.), I think he has a good taste for music:

NP: Little Steven—I Am A Patriot

There have happened some quite interesting Ruby things:

Yesterday, on #ruby-lang, we found out that iTunes doesn’t really satisfy our needs. Especially the playlist handling misses a lot of stuff I would like. (For example, I am unable to import a .m3u playlist keeping the songs in exactly that order. And that order makes sense.) Quickly it was decided that writing a music player in Ruby was the thing to do. :-)

Ilmari Heikkinen and me started shortly after using SubEthaEdit, a collaborative editor (both for the first time, by the way). Collaborative means that both users can edit the same buffer at the same time, which will get interesting

SubEthaEdit (which unfortunately exists only for Mac OS X) was very easy to setup. The host needs to open some port range whereas the other users don’t need to change anything. After telling SubEthaEdit the URI of the editing session, all participants can start to hack on. (Control of permission is available too; for example, you can let some people only read the buffer but not edit.)

Every user gets his own background color. Quickly, the display was full of colorful Ruby code.

This way of editing is very impressive. Usually, one participant starts coding something while the others look (or correct his mistakes). Then, as soon something becomes unclear (note that the participants can’t actually talk to each other; communication works mainly via code, and this is a good thing), he changes it to something that makes more sense to him, or adds a comment.

Then, discussion starts. Even more comments get appended until a solution (usually happens rather quickly) is found. This part is probably the most fun, and the most useful one too. Simple coding is not enough as all code gets reflected by several minds at the same time.

This is usually considered the strength of pair programming (an XP virtue), but with ordinary pairing, only one person has control over the keyboard while the other “just” watches. They have the advantage of being able to talk to each other, though. (This could possibly work using some kind of VoIP software over the net, too, but probably wouldn’t have worked very good in our case, as we both weren’t native English speakers.)

All in all, it was a very exciting and fun thing to do. I can only recommend to try it on your own (if you didn’t already do it). SubEthaEdit for now only runs on Mac OS X and I don’t know of any other collaborative editors (you could try putting an Emacs frame on another box using X11…). It probably can’t be that hard to write something similar on your own…

Today, my first ever iBook arrived (I ordered it last Wednesday, if there wasn’t the weekend in between, I’d have gotten it even faster.), and so far, it totally kicks ass. I bought the 12.1" one with a 60 GB disk for even more music/code/other cool stuff. :-)

It is just the right size, and the features and look are simply amazing. And you don’t hear a thing.

I have never used Mac OS X before, but after toying around a bit with it, it really looks nice and usable (heck, Expose rocks).

So far, I only found on thing that turned be off a bit: The keyboard, although of good quality has a quite, umm, twist^Winteresting keylayout. Why the pipe symbol | is Alt-6, for example, someone really should explain to me…

After reinstalling it for maximum customization (a hint ThreeDayMonk gave me), I think I’m going to spend some days to adopt it my working style.

BTW, I called it lilith because my (main) box is dubbed paradise, and there are nice, medieval paintings where Lilith (mythologically Adam’s first wife) gives Eva the Apple. :-)

Of course, such an event needs to be documented photographically:

On ruby-talk, there recently was a thread about the nicest programs for Ruby signatures. I proposed femtoblog, a tiny CGI blog in only 127 bytes:

Of course, that code shouldn’t be taken too seriously… heck, I need to get Nukumi2 out.

NP: Die Roten Rosen—I Wish It Could Be Christmas Every Day